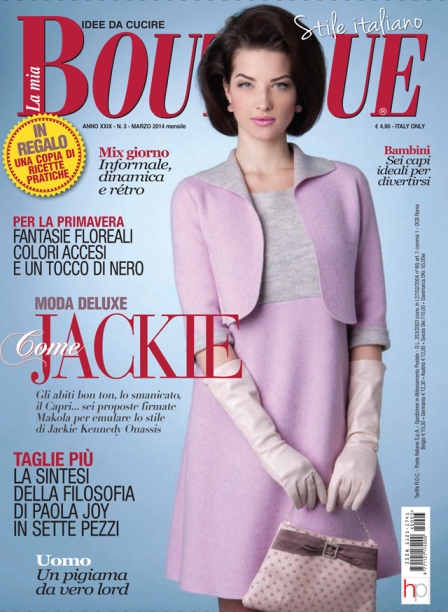 As you know by now, I am always very eager to get a new La Mia Boutique issue…and for this month I have another person eagerly waiting for pictures: Jana from Plokta who is joining me as this month’s Guest La Mia Boutique reviewer.

Jana is a great La Mia Boutique fanand she particularly loved the famous zipper dress from September 2013. She started sewing in 2012 and recently made a gorgeous Lola dress and a superbly finished purple turtleneck. I am very happy to have her for this review. And even more excited to have her boyfriend’s bonus comments! I think it’s a premiere on a sewing blog. Get ready for a total different perspective! 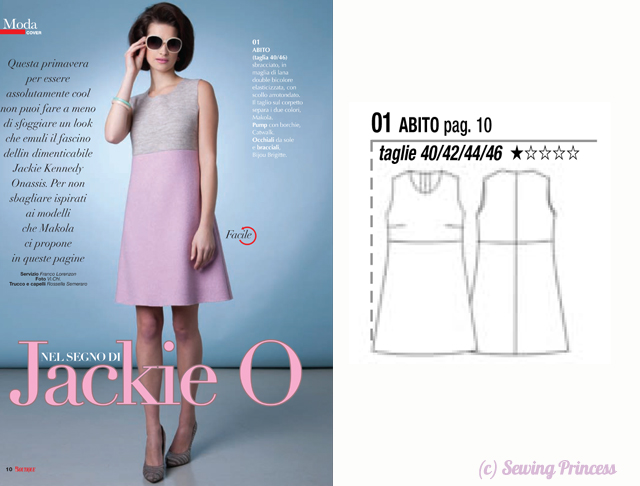 Silvia: March’s cover with its Makola dress seemed very promising…and the details of the first pattern fully meet my expectations. Yes it’s an A-line sheath dress…just like Deer and Doe’s Plantain T-shirt pattern simple patterns allow for the greatest creativity and most variations.

Jana: I agree on this one! It’s very simple, but I think that sewing magazines should regularly contain some simple patterns as well—both because they offer a “blank canvas” for customisation and because they’re accessible to people who are just starting out or who prefer clean and simple lines (like myself). I really don’t like the light pink, it’s very much not my colour, but I love the subtle colour-blocking effect. 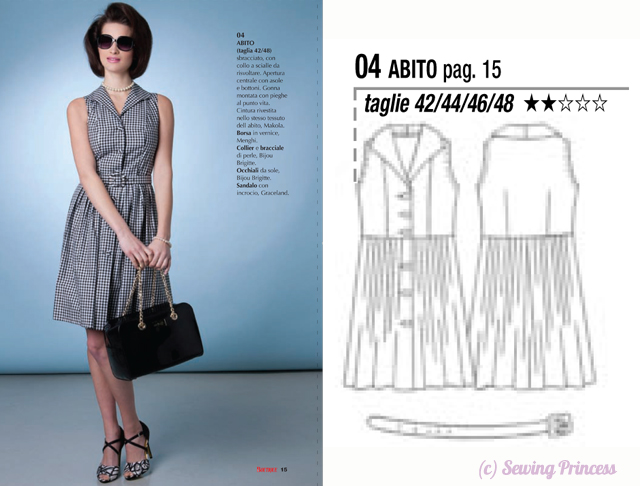 Silvia: Oh, I love this shirt-dress. A timeless piece. I never dared to buy any gingham fabric. What do you think?

Jana:I like the bodice, it’s a fun take on a shirt-dress with a slightly unusual collar, and I also like pleated skirts. I would probably make fewer wider pleats rather than so many small ones because I prefer that, but that’s an easy change. Too bad it doesn’t come in my size!

Bonus Boyfriend Comment: He really does not approve of this dress at all. Nor of the model’s hairstyle. We usually have similar tastes and we agree on most patterns in this LMB issue, but not on this dress, apparently. So perhaps it’s good that it doesn’t come in my size?

Silvia: This dress reminds me of one I made from Burda. I actually like it’s pleated rather than gathered…less volume around the hips. Though I like green I am not so sure about this one. Maybe I would add a contrast colour to tone it down or change it all together. But it’s a nice dress nontheless.

Jana: I like that one. I like the shape of the neckline and I’m a pleats kind of gal, so I think the dress is really pretty! I’m not convinced by the fabric choice, however, and neither am I by that … thing she’s holding. Is that a bag or what? 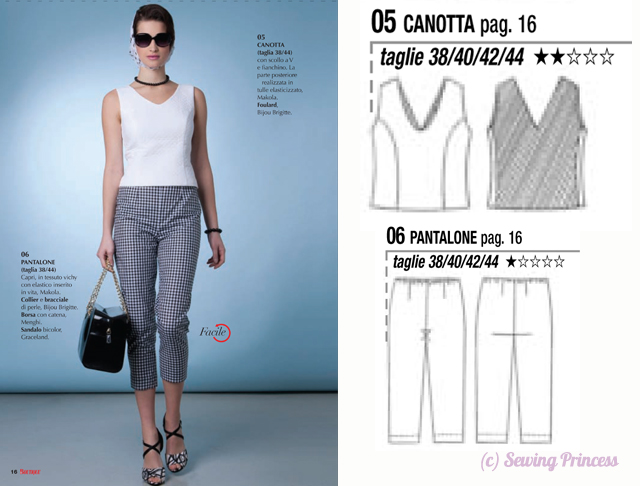 Silvia: Another classic look. I love the top’s simplicity and just for that I think it’s worth getting this issue. I love Capri pants but I am no so convinced about the elastic waist…I fear it may be baggy…though there are darts.

Jana: The top is cute and even though it’s pretty simple, I like the seam lines. I really like the side panels and it might be fun to use lace for them or to play with colour-blocking.

The trousers, however … are not my cup of tea. I’m not into capris and I’m not into elastic waists on adults’ clothing. The best I can say about them is that elastic-waist capris could probably look worse than these.

Bonus Boyfriend Comment: The capris are hideous, everything about them is just wrong. (Sorry, Silvia!)

Silvia: Well, I had originally skipped these patterns all together, because I didn’t like them. I would say the only positive one is the pencil skirt variation (not pictured). Perhaps you could do the jacket in a different fabric…but that skirt reminds me of something only a doll could wear.

Jana: Yuck. Both of these are just … no. The little notches on the jacket are kinda cute, but they’re in a slightly strange place, and other than that, the jacket is terrible. The tapering from the broad shoulders to the small waist just looks weird and wrong and 1980s to me. And I don’t even want to say anything about that poor excuse for a skirt. 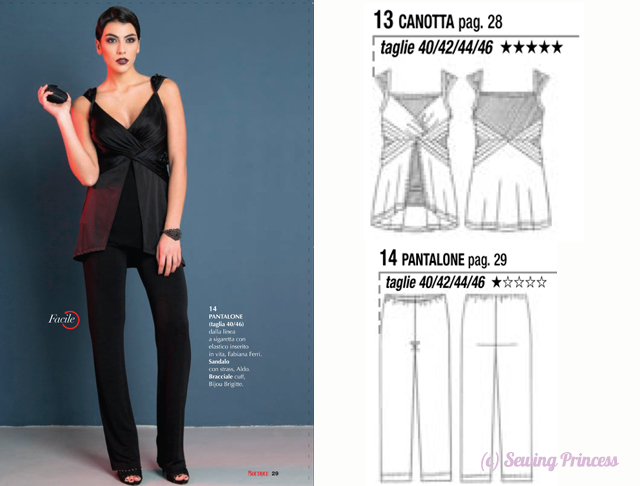 Silvia: And if you want to set yourself a challenge, this top is for you! 5 starts rating. And since I am often complaining about LMB’s style…well, I also want to say that I really like this photo and love the model they chose. Again another pair of elastic waist pants. Though I have reservations I must admit they look great on that fabric and with the outfit.

Jana: If I wanted to set myself a challenge, I would try to make something that I’d actually want to wear—which, I’m afraid, doesn’t apply to this top. Where would one wear something like this? I can see lengthening it and making a fancy evening gown out of it if you’re into that sort of thing—but alas, I’m not.

The trousers are better than the capris, but I’m still not convinced that elastic waists belong on adults’ clothing that isn’t nightwear. 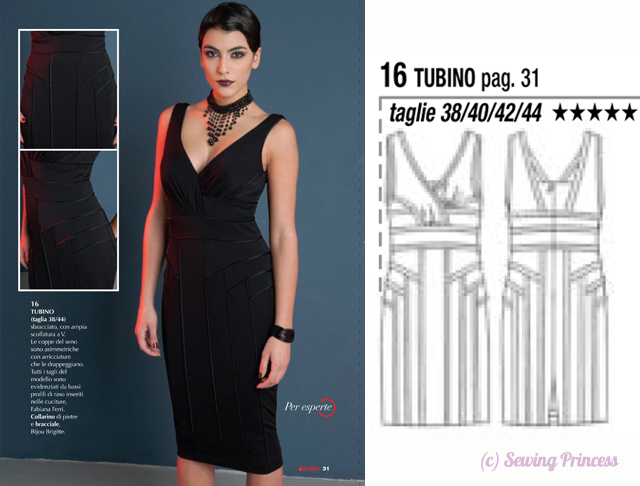 Silvia: When I saw this pattern my jaw dropped! I absolutely love everything about it from the styling, to their adding details. If I really had to find an issue with this pattern I would say the cleavage is a bit deep so I would have to fix that. By the way, the designer’s name is Fabiana Ferri. Jana, what do you think?

Jana: Now, this one is much more interesting and I totally get that you’d want to challenge yourself with it! I’m not a huge fan of the gathering around the bust. But other than that, it looks really stunning. And you are right, Silvia, the model is gorgeous!

I can also picture leaving off the bodice and making a skirt out of it, which would make it more suitable for my life. I might need this LMB issue just for this dress (or skirt, really)! (Not that I should try any “per esperte” patterns anytime soon, but one can dream, right?)

Bonus Boyfriend Comment: He doesn’t like the bodice of the dress at all. He thinks the piecing on the skirt is interesting in principle, but over-the-top, and fewer pieces would have worked better. He doesn’t like whatever the shiny stuff is that they used to highlight the seams. (On that, I agree.) Plus he doesn’t like the model.

Silvia: After loads of dark colors…here is some spring brightness. It’s a cute little jacket that can be made in many different fabric types. I am thinking it would look nice in denim.

Jana: I really like bright green, but I’m having trouble looking past the cutesy-swirly pattern. Is that a quilted fabric? In any case, I’m not into cutesy-swirly! Other than that, I think that the pattern has potential. I might possibly try whether it would work on me.

Bonus Boyfriend Comment: Bright green is nice, but that patterned fabric is atrocious and it’s really hard to look past that. The jacket might be cute in a different fabric. (Jana: See? We often agree. Just had to include his comment here to make up for the dress above!) 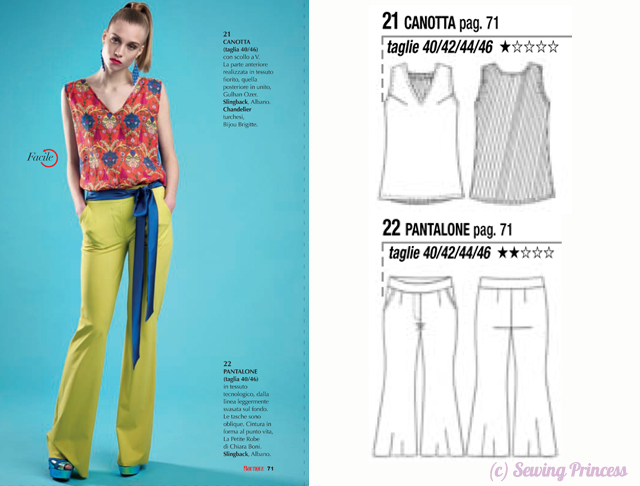 Silvia: Bright and colorful…though I am a gray lover, I have a thing for green. I love how they managed to combine these colors. If like me you like boot cut pants…this pattern is for you. The top is very simple yet it has an interesting dart placement. Do you like it or find it too wild?

Jana: I love wild! I love bold colours! I like to combine crazy colours that no-one in their right mind would combine, so this looks perfectly normal to me.

I’m afraid that that deep V-neck would look horrible on me, but if summer ever returns … I might want to find out. The top looks really comfy.

No thanks to the boot-cut trousers. What kind of a closure do these have, anyway? Is that a faux fly? I’m a fly purist, either sew a proper fly or leave it off altogether.

Bonus Boyfriend Comment: He doesn’t think that the top would work on me, and he doesn’t like V-necks. (Jana: Now I feel like making it just to spite him, ha!) He thinks that the top and the boot-cut trousers go really well together, but who’d want to achieve this look even if it goes well together? 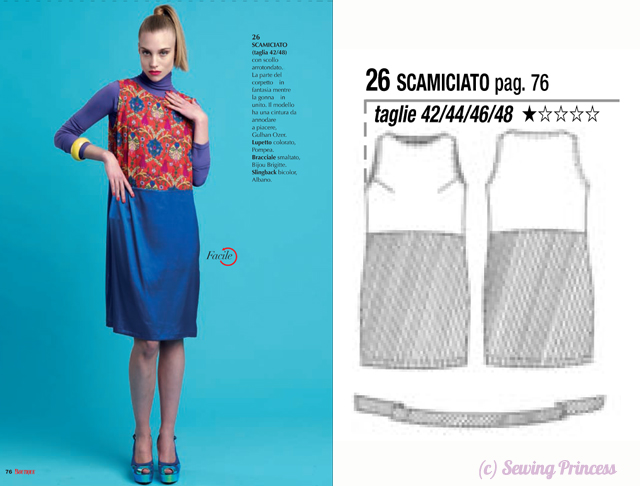 Silvia: Well, well, this pattern left me puzzled and this is the reason why I included it. What’s your view: take it or leave it?

So no, I don’t see the need for this dress in this issue. It looks like a shapeless sack, and not in a good way. (The belt might have helped with that if they’d actually given it to the model. Oh well.) 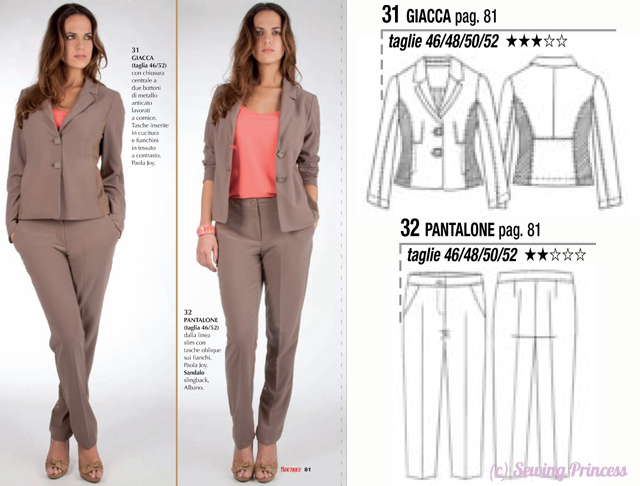 Silvia: After a lot of innovative, wild and retro patterns…here is a more neutral set. Though these patterns are meant for plus sizes, the model is rather on the slim side. (you can check pattern sizing) Nonetheless I think it would be a nice outfit for work or even a casual outing.

Jana: Looks like a perfectly ordinary, perfectly boring suit on the first glance, but looking at the line drawings, the jacket actually has a few interesting details: the seam line on the collar, the weirdly angled front darts (which I can’t see on the photo) and the interesting piecing in the back. If I were a plus size gal and had a job for which this would be appropriate, I would try it (and probably add a third button). The trousers really do look perfectly ordinary and perfectly boring, but that’s okay for suit trousers.

Silvia: Below you can find the full Pattern list. This month I found it very hard to choose which patterns to show you. My verdict is that I overall like this issue. If you want me to show you more patterns from the list, just ask me.

Jana: All in all, I think that this issue is a good one and I will probably go ahead and get a copy for myself (in German, if I can get it!). Thank you again for inviting me over to your blog for such a lovely “conversation”, Silvia! I’m feeling really honoured and I had a lot of fun looking through this issue and replying to your comments. (And then looking through it a second time with my boyfriend and adding in some Bonus Boyfriend Comments.) As you know, I love your LMB reviews and it’s such fun to be a part of one of them!

Bonus Boyfriend Comment: Overall he’s rather disappointed with this issue. He’s a big fan of the over-the-top crazy styling that they often have in LMB, with very colourful make-up and/or crazy bleached hair and such, and this issue is terribly boring in that regard. He says the models could just as well be Burda models or generic-fashion-magazine models—which he means as an insult. He really prefers the unique LMB look that is sadly missing from this issue. 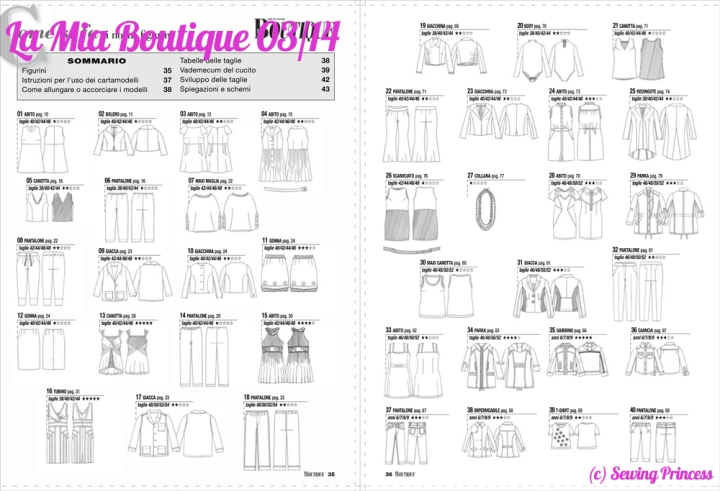 Silvia: Now is your turn! Let us know what you think! And I am curious: does your partner agree with you? And if you wish to be a La Mia Boutique Guest Reviewer for May issue or later, drop me an email

This site uses Akismet to reduce spam. Learn how your comment data is processed. 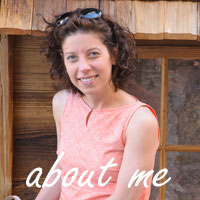